And his eyes are filled with Pestilence

But don't take my word for it.....ask the many people who have seen both the Pale horse and his Rider, especially during the past 12 months or so.

All Four of those guys have been riding for centuries, even millenia, and their Ride is almost concluded.


The computer case itself is military green, all the components/fan led's are black, red, blue, orange, a bit of brown, and some chrome

Yeah, I've been delayed in buying everything I need, but I'll finally get it done soon.

I already have the Case itself, the Corsair C-70 Vengeance

And the Mother Board, an Asus Maximus VI Hero

And the HeatSink, a CoolerMaster Gemin II with a 140mm Noctua fan sittin' on top

And 5 of the 10 fans that will be blowing chilly air throughout the Case, keeping things nice and Frosty

I'm gettin' ready to pick up the rest, all in one order:

And finally, a new APC battery backup unit (my old one died last year, I've been using it for surge protection only since then).

But it'll be battle ready

Plus the case is designed like an ammo box, so I'll also be able to store a few boxes of .357 in there

As far as fan control you don't need to buy that since you can download free ones and the one for the video cards (especially overclocked) is GPU-Z and there is also one that tells you your processor temp CPU-Z and it tells all the rest about your system but doesn't mess with your processor fan since you won't need that.

I think the one cooler you buy for the processor is all you will need.

All of my power supplies are the UltraX versions from 750 watt to a 100 watt one and they are guaranteed for life (you register it on their website after you start using it) and the cables they give you let you mount the PSU on top of the box instead of inside and it all runs cooler that way.

I also have the side panel off of all of mine and a big 20in fan standing at the end of a row of 6 computers blowing right into the boxes.

Check at TigerDirect for all the stuff you don't have yet since I never find better deals or faster shipping and they never have screwed up in my 14 + years. 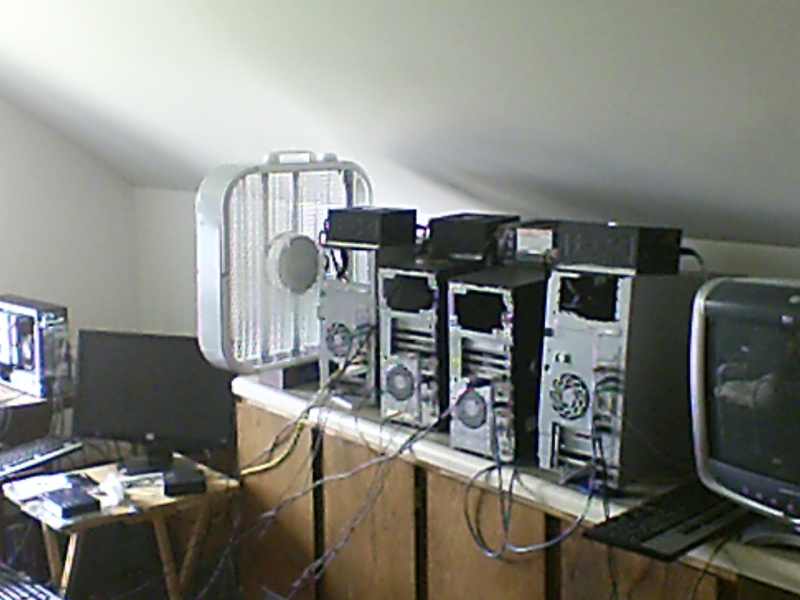 I like the idea of having a fan controller in one of the drive bays at the front of the case, it looks good, allows for immediate fan control, and only costs about 30 bucks. I'm going to splice two fans to each channel of the fan controller, ie; both intake side fans to one channel, both front intakes to one channel, both bottom intakes to one channel, then I'll assign each of the two top exhaust fans  to independant channels. I'll use the motherboard/bios if I need to adjust the rear exhaust or the other ssd cage intake fan (the ssd cage will have a push/pull config, I'll have the outer push fan hooked up to the controller).

As for the graphics, I'll just go with Asus this time. This is my first computer build, so it's all Asus and Corsair components, except for the heatsink and a few of the fans.

I'm building this machine for a blend of function and looks, so I don't want to have the side panels off.


That'll last me a good 5 years, but I'll be buying a second Vengeange case later this year, but I won't build it 'till later. At some point, I'll use one for work, the other for home. I love the C-70 Vengeance....I need to buy more ammo

Who can say no to a munitions box turned into a computer??

But as far as looking cool.......well I guess if I turned all of mine around so you saw the front instead of the back it would look better

But I do that because I only want to use 2 monitors for them (sometimes 3) so you have to be able to switch the cable to the video cards.

Get any "make" of video card since that makes no difference but get the "Ti" version since that does make a difference.

No "Ti" and you just have a rookie card

Mine are actually the Top 3 but that one guy was caught scamming and making up fake numbers and he quit when I proved it and that other guy who is still running just decided to quit the scamming and now runs properly.

And my 5th one is #32 there but it has not been there all 3 years or all 9 years for Einstein and #6 is my laptop which will have 2 years in the projects the first week of June running 24/7 just like all the rest of them.

Bro, Tiger is either the same price or more expensive than Amazon

mighty_colts wrote:Bro, Tiger is either the same price or more expensive than Amazon

And, if you have Prime the shipping is often free. I've ordered a freakin' comb on Amazon Prime and UPS dropped it off 2 days later. Don't want to think about the carbon footprint of that $3.00 comb that came from Arizona.

And why would "same price" be a bad thing considering TigerDirect is in the computer business?

I compare the prices all 14 years of being a customer and they ship fast and always back up what they sell me.

Free shipping most of the time too.

You also need to know all about the different processors from AMD and Intel and you don't get that from Amazon.

Are you talking about VirtualBox??

Of course that is a free program and you can get the version for any OS old or new.

Ok, I'm gonna do that, I'll get the XP version so I can continue using my old Frontpage software for the BC website, plus I want to keep using the XP format daily, anyway.

mighty_colts wrote:Ok, I'm gonna do that, I'll get the XP version so I can continue using my old Frontpage software for the BC website, plus I want to keep using the XP format daily, anyway.

No more XP updates are needed so don't bother doing any the last couple days since they don't help anything.

I use the VB on all 7 of mine for the CERN LHC tests and it runs milliions of them and it even works fine on my old XP Pro X86 32 bit pc's that can only use about 4GB ram no matter how much you plug in.

I do use more RAM on my X64's but that is not needed for the VB and I used to run double tasks using VB and Einstein GPU tasks at the same time on all of them with no problems and I don't even have any fancy cooling but I do use GPU-Z the free program to use to show you the clock speeds and temp of the video card so you have an idea how hot it is and mine run at 60C or lower on the main 6 but my laptop does even more work 24/7 at 83C with no problems.

I use the EVGA Precision X free program to also set the fan speeds on the video cards and do extra overclocking or voltage settings and the program will work on other cards beside EVGAs since I use it on my 550Ti "Gigabyte" card too. 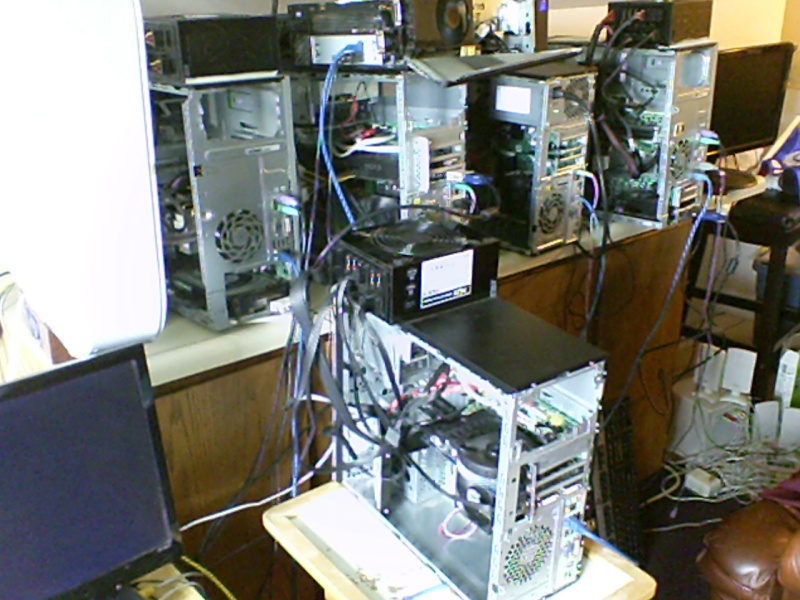