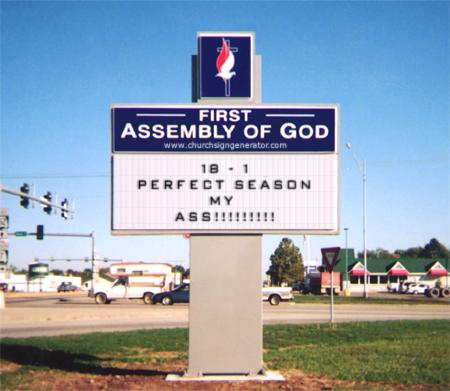 It's a sad day in Boston. Happy and full of joy everywhere else, of course. But sad in Boston.

Bostonians are coming to grips with the demise of the greatest team ever the New England Patriots.

As you may know, there are five stages of grief: denial and Isolation, anger, bargaining, depression and acceptance.

This is how Patriots fans will progress through the various stages. Please be understanding of their plight. Keep your pointing and laughing to a minimum.


I just can't deal with it right now. I don't want to talk to anyone. I just want to be alone. I'm not taking calls from any of my friends.

If I talk about it with them, that means I'm not dreaming and the Pats really lost. I am not yet prepared to face such a reality. My entire identity and self-worth hinges on the ability to act smug about the supposed supremacy of Boston's sports teams, as though I had something to do with their performance on the field.

If that goes away, I am an empty shell. I am a fraud. I would have nothing. And I'm not ready yet to deal with that. So I will simply deny that it happened.

I need to go someplace where I can get my thoughts together. Someplace quiet and empty. Where could that be in Boston? Oh, I know. Anywhere along the normal championship parade route.


I have a friggin' Patriots helmet tattooed on my head! On my bald head! What am I supposed to do? I feel foolish now! I wouldn't have done it if I knew they were going to lose. I just feel so misled! I feel so stupid.

Not as stupid as Bill Belichick, though. Genius? Yeah, right. You cheat in Week 1 against the Jets, but can't muster up a worthwhile cheating plot in the Super Bowl when it matters? Moron. Oh, and did you notice when you were walking off the field before the game was over that we lost by three points? Nice call going for it on fourth-and-13 when we were in field-goal range! Who helped you make that genius decision: Girlfriend A or Girlfriend B? You just got outcoached by Tom Coughlin. Badly. By Tom Coughlin! Half of the man's brain is still frozen from the Green Bay game, yet he made you look like Rich Kotite.

And Tom Brady … really? You needed a haircut from your stylist the night before the game?!

Maybe you should have spent more time watching film, you dainty little girl. And didn't you learn anything from Tony Romo and Jessica Simpson?

What's with having Gisele there watching from a luxury box? She shouldn't have been there. Actually, no. She should have been there. On the field. Playing for you. I'm sure her 72-pound body could have withstood the pass rush better than you, nancy boy. You're dead to me, Tom Brady. (Although I will be open to impassioned, aggressive make-up sex. Call me.)

Rodney Harrison and Vince Wilfork, you may not call me. You guys get all of these personal foul penalties and fines in games that don't matter, and then come up with nothing in the Super Bowl? Way to choke, losers. Maybe if one of you had kicked Eli Manning in the crotch while he was standing in the huddle, we'd be Super Bowl champions today. Harrison, how do you let David Tyree catch that pass against his head on you over the middle on the final drive? After he scored their first touchdown, he shouldn't have had a head. You should have decapitated him. I thought you were smart. One would think you'd have a big brain inside that giant, HGH head of yours.

Sen. Specter, are you just hating on the Patriots because they beat the Eagles in the Super Bowl?
Oh, and go to hell, Sen. Arlen Specter. (Or stay in Philadelphia. Same thing.) Get over it, you loser. Your Eagles lost. They weren't good enough to beat us. The Patriots are better than the Eagles. Just like New Kids are better than The Eagles. (I love Donnie!) And who are you, anyway? I never heard of you. If you're not a Kennedy, you're crap. Come up here to a real state and let Teddy take you for a drive out to Chappaquiddick.


And same to you, Boston Globe. Thanks for jinxing the team with the 19-0 book.

Next time I am out of toilet paper, I will purchase your rag. Meanwhile, I hope there are a bunch of kids in third-world nations who want to read a book of fiction about an undefeated American football team.

I can't even believe I'm saying this, but do you want me to admit that Tom Brady is overrated? I will. I'll say it. I'll say it if you'll let the Patriots play the game over. Do you see how far you're making me go? How much I want this? I am willing to speak a negative word about the most beautiful and perfect man ever made. I'll admit that he stunk in that playoff game against the Broncos two years ago. And that he blew our chances last year against the Colts by throwing that interception in the fourth quarter. And that he was a big zero in the Super Bowl against the Giants. He's been folding under pressure in big games for three years in a row. He's like a Manning, but with a better jaw line and two fewer Super Bowls since 2004.

I'll do anything to make this different. Say that Rodney Harrison is an HGH-fueled cheater? You got it. That the tuck rule was a sham? No doubt about it. That Bill Belichick once coached the Browns. Sure, I guess.

Roger Goodell … come on, man! We're in this together. Once you trusted Belichick to tell you the truth and then destroyed all of those tapes, our fates became intertwined. If we go down, you go down, ginger boy. So it's time for you to trust Belichick again. Here's what you do. First, destroy all of the game tapes from the Super Bowl to get rid of the evidence. Then, call up Belichick. He'll tell you that we beat the Giants. Then just go to the public and say: "The Patriots beat the Giants in the Super Bowl. Bill Belichick told me they did. He promised me he was being truthful, so I took him at his word." See how easy that would be?

Hey, I'll even admit that I never even heard of the New England Patriots before January 2002. Well, I heard of them. But I always thought they were, like, some kind of Revolutionary War re-enactors or something.

Come on. I'm being straight with you here. Give the Patriots another shot. Best out of three? Best out of seven? How about seven? The Red Sox lost the first three in 2004 to the Yankees and still came back and won.


Life is not worth living.

I've spent the past five months of my life telling everyone I know how great the Patriots are and how much their team sucks. I've called radio shows. TV shows. Written countless words on Internet message boards. My entire self-esteem was based on the success of a football team filled with a bunch of players I've never met in my life.

Now I have nothing. They'll get over it. They're rich. They have hot wives and girlfriends. But I have nothing. Just this tattoo on my head and a crappy, second-shift job at Dunkin' Donuts.

There's not hope for the future, either.

Tom Brady is balding. He's past his prime. It's all downhill from here. He's in his 30s now. He'll never get close to 50 touchdown passes again. His ankle is hurt. His shoulder is all messed up. Who knows what else is being hidden in the injury report. Gout? Scabies? Mumps? Measles? Rubella? Gisele will see the writing on the wall soon enough. She'll dump him. Then he'll start dating Jessica Simpson. And then it will get worse from there. Three years from now, he'll have a 65 quarterback rating and four kids with Britney Spears. We should just use our first-round pick this year to draft a quarterback and get it over with. Goodbye, Tom.

And goodbye Rodney Harrison, Junior Seau, Mike Vrabel and Tedy Bruschi. You could all retire. Or not. It doesn't matter either way. Without you, our already suspect defense is decimated. With you, we're another year older and slower. Next year, we're going to all offense and absolutely no defense. Ohmigod … we're going to be the 2004 and 2005 Colts.

I think I'm going to throw up.


OK. So we lost. It happened. We were 18-0 and lost in the Super Bowl to Eli friggin' Manning and the New York Giants. It still sounds insane to say that out loud, but facts are facts.

Truth is, I'm fine with it. That's three years in a row the Patriots haven't won a Super Bowl. What kind of dynasty is that? If they're not going to represent Boston the right way and win championships, they can get lost. I'll go back to pretending they don't exist like I did before January 2002. I mean, they're not even a Boston team. They play in Foxborough. That's where they belong, too, the losers. I've got better things to do with my time than root for a bunch of losers.

Like root for the Celtics, for example. Best record in the NBA, baby! How 'bout them apples?! You know you are jealous! Your teams sucks compared to the Celtics!

I'm going to go get Brian Scalabrine's face tattooed on my head.