Another reason I never switched from being a Colts fan to a Toucan fan.

Hell never even seen a Raiders player do that bs .....especially in the Super Bowl

Most people didn't see this because they covered it up at NBC so it wasn't on TV and here is more news about this.
http://nypost.com/2015/02/03/nbc-producers-dead-mother-kept-us-from-doug-baldwins-poop-celebration/

AND just your average Seatoucan fan

I seen the pic of that..........That's horrible.
Hopefully Goodell and his goons fine the shit out of him for that. 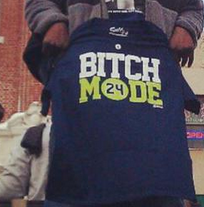 Per USA Today, "Seahawks wideout Doug Baldwin will lose $11,025 for his obscene gesture — he pretended to defecate on the ball after his third-quarter touchdown..."

BlueShoes1 wrote:Per USA Today, "Seahawks wideout Doug Baldwin will lose $11,025 for his obscene gesture — he pretended to defecate on the ball after his third-quarter touchdown..."

Yeah they left a 0 off of that fine

11K means nothing to that jackass.

Most people watching it on tv didn't know why he got the celebration penalty and they didn't show it on tv but as always it is on the web minutes later and that is how I found out and got the video.

Or like that other jackass who scores a TD and then turns around as he crosses the line and grabs his tiny balls for the world to see.

That pretend QB is about the only one on the team that doesn't act like a jackass on national tv.

But of course the fans of that team think its cool to do that crap.

Imagine living here and seeing and hearing that crap every day and of course the local tv news guy here is Steve Raible who can never stfu about these punks.........funny thing nobody on HIS Toucan team acted like these idiots.

Similar topics
» This is how every Seatoucan game should begin and end.
» Typical Baltimore Welcome
» Typical night game @ the NFL General board