I hate those fuckin cheaters!!!!!

I hate those fuckin cheaters!!!!!

Too little too late,

PHOENIX — NFL officials are now making up new signals on the fly.
Head coach Pete Carroll said Thursday at the Seattle Seahawks’ team hotel that officials will use a signal to identify which New England Patriots players are ineligible in Super Bowl XLIX. The signal will look like one used by officials for a missed extra-point. Officials previously announced which player was ineligible, just as they do when offensive linemen are declared eligible.
The Patriots began using eligible players as offensive linemen in their divisional-round win over the Baltimore Ravens this season. Ravens head coach John Harbaugh made a stink that officials weren’t giving his team enough time to realign after finding out which player was ineligible.
The Patriots made running back Shane Vereen ineligible twice and tight end Michael Hoomanawanui once in a third-quarter drive. The Patriots drove down the field and cut the Ravens’ lead from 14 points to seven.
http://www.msn.com/e...8Kcb4?ocid=iehp

On this particular issue, I don't see it as cheating, just making the rules work for you.

Will the cheating ever cease? 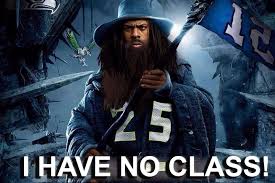 Yeah I hate BOTH teams and would love to be a TE that got the chance to flatten Sherman or a MLB to do the same to that that RB bitch.

The only reason I want NE to win is so it will make all those idiot fans here stfu about all this crap and even the ones that call Wilson one of the greatest QB's ever.......I even hear them saying he was the best QB this season and tell ME to actually check the stats.

After watching all 48 SB's and games for 50 years I think I know when a QB is great and not @182 on the NFL stats page like Wilson is.

Hell the Toucans have several QBs ahead of Wilson as far as QB stats.