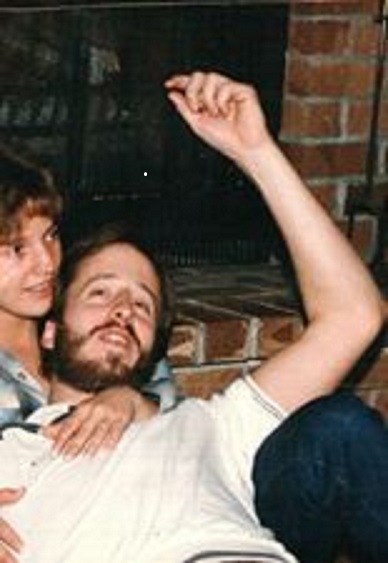 He would have turned 52 today

No worries, bro.....he's doing fine....probably better than the rest of us

Yeah I guess so........bet it surprised Mom to see him so soon (and our sisters)

Makes me wonder about other things.........like is there a reason we have billions of galaxies, and is that where that final place is?

And that Earth is not that final place?

Only one way to find that out I guess.

My brother is the reason the house I am sitting in even exists.

My guess is that there's life on worlds in other galaxies, not just our own.

As for our "final resting place", it's not so much a question of which galaxy or even which planet....but which dimension/kingdom. There are many planets and many dimensions/kingdoms

So your brother/family are in one or more of those, watching you day-by-day. Deceased family members have a great interest in their living relatives, along with friends of yours or other individuals who have some kind of connection to you in one way or another.

Sorry to hear that Magic,

there aren't any words that make it easier or better, know what you are talking about though.

It is going to take a few years

We never forget (and that's a good thing). We do, however, over time learn to let go and get used to living with the ever-present absence of those loved ones who died. It's more than 10 years since Nancy died and there's not a day that goes by I don't think of her still but more often than not those thoughts are of the good times we shared and cause me to smile. Loved that woman and I was one very, very lucky man to have her in my life for 41 years. Doesn't get much better than what I had and those memories sustain me.

Grieving is tough work and, as they say, you've got to work your way through it to get to the other side. There's no avoiding the pain or the sorrow. Hang in there, Bill. Eventually you'll be able to allow the celebration of your brother's birthday to be a time of thanks for having had him in your life without it being cause for sadness. Think of the good times.

Yeah I still remember that Norm because it was my first summer in this house and I had that picture of the sunflower standing by itself behind the house......as usual I take pictures and I sent that to you for Nancy

You were a lucky guy and I have never had anything close to that.

Then Mom in 2011 so it was almost 3 years since then so I just remembered the old times and some pictures I have and how she was 29 when she moved us kids here to where I have lived for 43 years now and on this property for 30 years.

I figured after all my stuff over the last 14 years that I would be gone before my little brother and just a week before that I was thinking of calling to see if I could get him on the phone (and he never in his life used pc's or emails) because I was thinking about giving him my Jaguar since I never drive it and it sits in the garage 11 month of the year.

Sure would have been nice just to talk to him since the last time we talked was at Moms funeral.

I always pretend that I will live to be 100 but of course that won't happen and since I know nobody will take care of the stuff I have here........well I don't really care except all the birds and critters here will be bummed out and wondering where the sugar water god went and the duck food god

I also know that any relative I have won't spend the money so I have been paying for my account and bought my own piece of land at the 100+ year old cemetery 3 miles from where I have lived most of my life and have all the money to pay for the biggest standing chunk of granite ever seen there so the guy will have to mow around me every summer...........and with any luck on the last day I spend my last buck since I never got one second of help to collect it and none of the .............deserve a present.......oh sure they will fight with my goofball son over my cars and property but that might be fun to watch with Mom and the rest of the family and there is quite a few now up there with the Spirit in the Sky