STEELERS - Loss to the Ravens

STEELERS - Loss to the Ravens

Some have blamed Coach Tomlin for last nights loss.
Yes, I blame the coach, but not last night, no I blamed him 2 months ago.

I blamed him after the second half kickoff of the first preseason game.
It was just another one of those meaningless preseason games that are way too many of.
A pro football coach needs four games to determine who makes the team?
Give me a break, high school coaches can do that in a week!

Anyway there he was kicking off and getting involved in the game making a tackle.
It just happened to be the first preseason games when he has a season ending injury.
To me he shouldn't have even been dressed for the game.

To me none of my first team players would even see the field the first 2 of the 4 preseason games.
You have 100+ players for those games so play the 70 or 80 you don't know that much about.

Well anyway it worked out just about the way I figured it would - They lost a game that matters!
They finally had a kicker who can kick the ball fairly well into the open end of the field,
now he is gone and they are scrambling trying to find a replacement kicker.
They night lose another game or two because they miss their number one kicker.

No, last night the Steelers lost it on their decision when the won the overtime coin toss.
They should have elected to defend the end zone at the open end of the field! 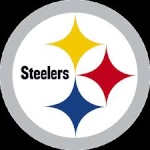 Pittsburgh should have won that game and Josh Scobee isn't a rookie and in the past made FG's close to 60 yards to win games.

But I see there are 3 kickers on the list that could be signed too.

The Steelers would just move down field and get close and then get stuck and punt.

Espn sure is talking about the coach and those FG attempts today http://espn.go.com/nfl/team/_/name/pit

The way this game went I was hoping it ended as a tie since they both screwed up over and over and Vick is playing like this is his first time playing in the NFL and his only skill is running and hoping there is only one defender near him........or less.

But I have seen several FG kickers kicking bricks so far this season including the old fart we have.

I would rather have our punter kick FG's

I knew we would win at the OT coin flip when Pitt one the toss, and wanted the ball. That open end space at Heinz is a nightmare, so glad we didn't have to kick into it.