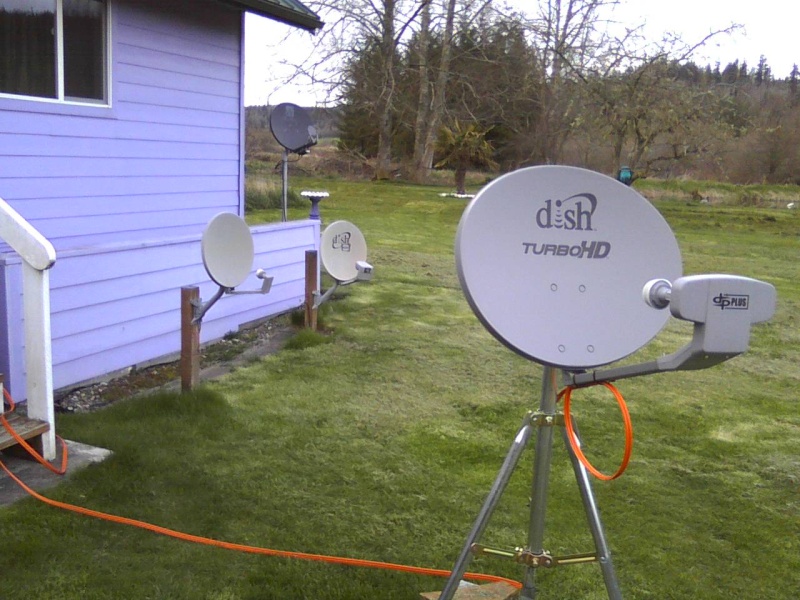 NASA dosen't have that many dishes!!!!


I that orange cord coming off the LNB the HD feed?

I am thinking about going to Dish since they have the free HD for life and the best packages available.

And which one goes to the FTA box and did they crack the new script?

Yeah that one with the heavy duty orange cable is a triple LNB HD dish and the HD receiver is in the house.

And the other DishNet in the background is the one I use for FTA but we still can't get the code to use that since only certain people get to get into the hook-up and it uses a connection to a computer and you have to use a credit card....all that crap I won't do.

I still have the C-band/KU-band 10 foot dish too....it was next to me when I took that picture.

I am not actually paying to use that HD dish you see there.

Somebody had it set up at the end of the road and then moved and left it there and never got a bill so I brought it home after it sat there fore 8 months.

I just pointed it in the same direction using the Sun to line it up and when I hooked it up here the HD guide popped right up so I got it right.

But I'm not sure if I want to call and have it turned on since they might try to bill me for somebody elses dish.

AND the receiver has a DVR and I don't need that and don't want to pay a monthly fee to have the damn thing on top of the rest of the billing.

I might try and see if they will send me the receiver I want and let me set it up so I don't have to pay a guy to come here.

And then just call and tell them to turn it on.

Since I have been a customer for years they won't give me the free deals.

And I'm not moving just to get the damn thing.

Funny thing I use the old Dishnet receiver and dish that has been here for 15 years but I have my 2nd bigscreen DLP and never have got the HD signal.

Good thing the 82in DLP Mitsubishi has a program built in that comes close to making it a 1080 picture so it is ok.